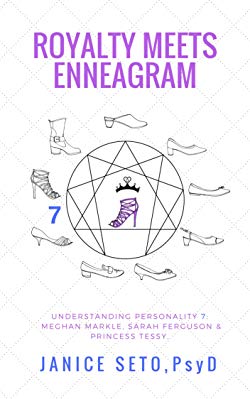 What do Meghan Markle, Sarah Ferguson Duchess of York, and Tessy Antony de Nassau Princess of Luxembourg have in common? It may be their personality styles! Enneagram 7 personalities are known for their effervescant energy, fun frolics, and optimistic outlook. Sure, there are pitfalls that come with the package, but you can’t take your eyes (or paparazzi lens) off of them! In this series on royal figures based on the Enneagram typology system, Janice Seto has a lighthearted look into their distinct personalities. Based on years of research, she says their behaviours and actions and portrayals in the media emanate from one of 9 personality styles. For royal watchers everywhere as the series looks at European as well as the British royals.

Janice Seto writes non-fiction and commentary including articles for The Bridge, the publication of The Malaysia-Canada Business Council. Save Your Breath: Making Better Deals by Talking Less is an expansion on her article, on negotiating, for The Bridge. Over the years, she has studied royalty and studied the Enneagram personality system and written her dissertation on the topic. Royalty Meets Enneagram is her latest series. Her more recent books are also available on Amazon: Standing Out in The Background – A Guide to Extra Work in Toronto’s Film & TV Industry and Johnny Seto’s Bowmanville – An Enneagram Perspective. Her first children’s book, Walking for Clean Water: Pukatawagan on the Move, is in English and Cree, with Ralph Caribou providing the Rock Cree dialect translation. The System for Women is her first book series on relationships, based on the hilarious but insightful work of Doc Love http://www.doclove.com/. Parts 1 and 3 reached #2 on the Amazon Bestseller list in its category as a free download. Part 5: Pride and Prejudice reached #1. Bowmanville’s Octagon House – From Church and Faith and Tait to Irwin & Seto also went all the way to #1.